The Rebirth of O'Bryant Square

In high school in the 80's with the newly launched MAX to downtown, we were afforded an opportunity to get “into the city.” We would wander around shopping for used CDs, catching a movie, eating at McDonald’s or if we were feeling flush, the Metro on Broadway. One part of town we steered clear of was up by SW 9th and Washington and to the northwest. That's where Crack Park was. I only learned as an adult that it had a real name - O’Bryant Square. 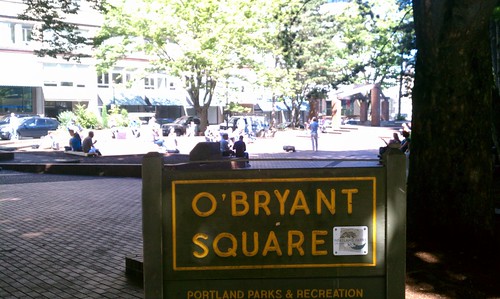 O’Bryant Square is situated between SW 9th and Park and Washington and Oak. Named after Hugh Donaldson O'Bryant, a pioneer who founded the city’s first library, the park was built in the early 70’s with parking underneath and a large bronze fountain in the shape of a rose. The park, built mostly of brick and concrete won an award in 1976 from the U.S. Department of Housing and Urban Development. So what happened between then and the mid 80’s when it was the pariah of city parks?

In the last few years, whenever I have been at the Alder pod and it isn’t raining, I would walk over to O’Bryant square to eat. Initially, it wasn’t the most welcoming spot with large planter boxes covered only with barkdust and a broken fountain. I had inquired with the parks department and learned that it leaks heavily and the repair costs were high and that at the time, it wasn’t a priority. Sadly, it seems neither was keeping the park clean or with living vegetation.

This past week, on a sunny day, I picked up lunch from 808 Grinds on the corner of SW 9th and Washington - a cart that is part of the expansion of the Alder pod in 2010 and 2011. I crossed the street to O’Bryant Square and was shocked at how difficult it was to find a place to sit down and enjoy lunch. While eating, I marveled in the activity in the square. Children were running about being pursued by their happy parents. A fiddler in the center of the square entertained everyone. There were people everywhere either eating or chatting or just relaxing in a city park. I overheard a woman comment, “this is strange, I would never have come to Crack Park just a few years ago.” It made me realize that this park has seen a rebirth and has been rediscovered by a new group of patrons who enjoy it during the day with their lunches from the carts.

Did Crack Park once again become O’Bryant Square as a result of the food carts? I don’t know, but I refuse to believe that the increased foot traffic in the area and 20 new micro-restaurants that have arrived in the lat six months don't have something to do with it. The city has even replaced the wood benches this summer realizing that the park is being used more and more each day. Next, I hope they plant some roses or just some colorful shrubs to liven it up a bit.

Street food is a way of bringing a community together like a farmer’s market or shared garden. Every day I visit the carts throughout the city and see neighbors chatting and kids playing and colleagues re-connecting. All because of food. Now we see evidence of how the carts have played a role in transforming a derelict park that no one would visit into a destination for kids and families and buskers. Food brings people together.