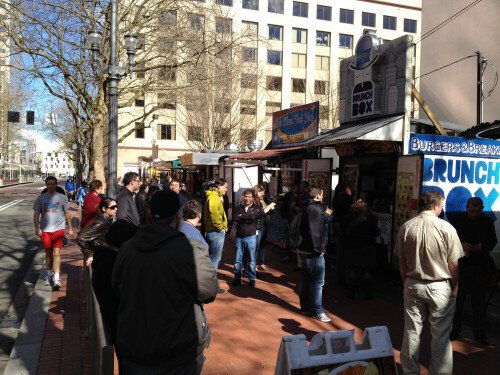 Today, The Oregonian
reported that the Goodman Family has announced one of their most ambitious projects for downtown Portland. The Ankeny Blocks will comprise of 11 new towers in and around Burnside to Washington from 6th to the waterfront. 11 towers! Let that sink in for a minute. Where will they all go?

If you don't know the Goodman family, over the last century they accumulated a vast portfolio of downtown real estate in the form of surface parking lots and built a parking empire named City Center Parking. The land is owned by the family and others, but the parking management company was sold to a Canadian firm a few years ago. The Goodmans now will affect significant change both to the Portland skyline and to the density of downtown. And that means 60-70 food cart vendors will need to find new homes.

The food cart lots at SW 5th and Stark (Portland's oldest and original food cart pod,) SW 3rd and Washington and SW 2nd and Stark will be no more. The development calls for those lots to become mixed use buildings. It was inevitable in the era of ever increasing development and evolution of this city we call home, I just wasn't prepared to read on a Saturday morning that 1/2 of the food cart pods in downtown Portland will see their demise sooner than later.

Now I have a call to action. Portland is unique with street food in this country. Most every other city has food trucks who move about in and out of the city center, park and serve their patrons. Portland doesn't due to an outdated "no business in the right of way" law enforced by Portland Bureau of Transportation. In cities like Boston, Washington DC and Seattle, parking zones in the city center are identified where food trucks are allowed to park and sell for a set amount of hours. If the food cart vendors in downtown Portland want to continue serving the downtown crowd, laws need to be changed. Food cart owners need to come together and get in front of City Council and let them know that Portland street food scene is part of the city fabric. Every city has it, so as we develop, we need to find a way to keep it.

If there are any vendors who want to lead this charge, contact me, Brett Burmeister, and I will help you identify the city codes that need to be discussed and who to talk with.

In the past 3 months, 2 food cart pods have closed as a result of development and 1 more will close soon. While these are on the east side and other food cart pods have opened, it is disturbing to see so many vendors displaced all at once. Portland's street food scene is now going to experience a change that may portend a sad future for the vendors, employees and eaters. Hopefully, our city leaders can see the value in small business and adjust accordingly.