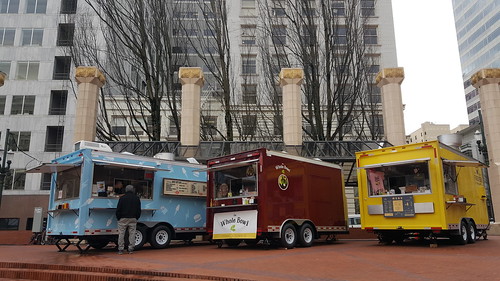 Portland's living room now has permanent food carts. As part of the year long renovation of the park in 2016-17, the city decided to create a more active space for street food vendors and attract some rock stars. Prior to the construction, the carts at the square were open-air and had to move any time the square was used for large events. In the new model, three full size food carts have been placed up by Broadway with a fourth vendor (an original) is parked down off Yamhill where they've been for years.

Burger Stevens
- opened in Hillsdale a few years ago, this cart brought back the simple cheeseburger and does it well. Get it with two patties event and you're still getting a deal at $9 for all the fixin's. 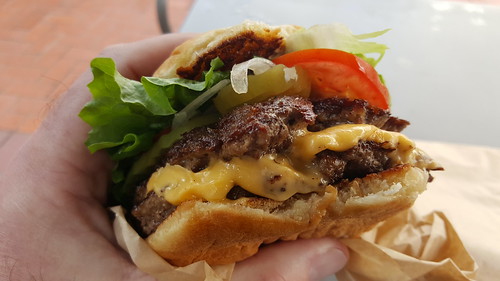 The Whole Bowl
- After more than a decade and eight locations, including two restaurants and outposts in Cinicnatti, The Whole Bowl is now bringing their signature dish to the square. Just the one bowl has made them famous world wide.

According to sources, more vendors are in store, but I kinda like the look and feel of the four currently there along with the large covered seating area above the KGW studios. Come summer, I hope these guys can handle the masses. 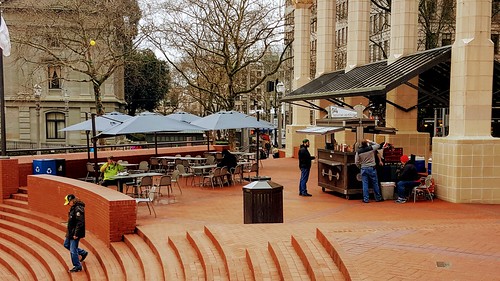 Pioneer Courthouse Square is located in the center of downtown Portland at the cross streets of SW Broadway, Yamhill, 6th Ave and Morrison. Check Vendor links for menus and hours.