Dueling Oktoberfests featuring food carts are happening the weekend of October 2nd, so plan accordingly. Both Mississippi Marketplace and A la Carts are hosting the German festival with beer and your favorite cart food. Mississippi Marketplace has PROST!, the German pub as the anchor and are putting together food specials and even a local microbrew challenge. A la Carts at SE 50th, just south of Division with 10 carts will have beer, live music and events for the kids all weekend. If you are in SE or NoPo, you have some great options to celebrate fall the German way. __________

Have you ever wanted to go behind the scenes and see what happens in the kitchen at some of Portland's best restaurants and food carts? Do you have a burning question for one of the city's best chefs? Well, now you have a chance. A new company - Portland Food Adventures has launched and will be your host to take you behind the scenes. As part of their offerings, they are doing tours of restaurants, including some carts. The first "adventure" is a behind the scenes dinner next week at Nostrana. 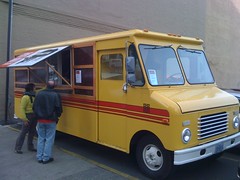 As part of their launch this month, Portland Food Adventures would like to give away some gift certificates for lunch at The People's Pig. To get into the running, simply visit their Facebook page
and "Like" them and they will pick a winner at random. Let them know Food Carts Portland sent ya.

New Pod alert! A new pod is taking shape at SE 32nd and Division. With a scheduled opening date of Oct 5, carts planning on locating there include Fuego de Lotus, The Pie Spot, Namu, The Donut Trolley and Captured by Porches. You may recognize that last one as a local microbrew. I wonder if they have figured out how to open a beercart.

Food Cart babies! Yep, there are a couple cart babies on the way and another that has already arrived. Food Carts Portland would like to congratulate the Viteks from Tabor on their newest addition born earlier this summer. Built to Grill will be closing for a spell in the coming weeks to celebrate their upcoming birth. Get your sandwiches or pasta before they close. Ninja Plate Lunch, another wonderful cart with a wonderful owner who makes some great Hawaiian food, is also expecting in the coming months. Congrats all. __________