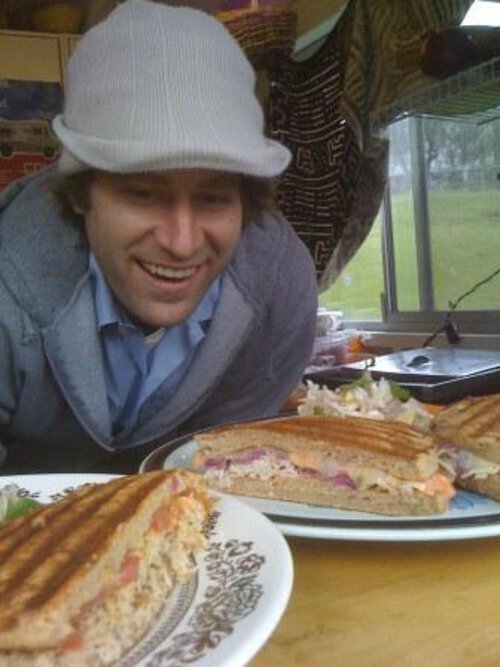 Note: This a new series from Food Carts Portland focusing on the people behind the carts. We'll be doing profiles, interviews and even a Q & A or two in the next few months with people who have helped make Portland's cart scene what it is today. If you have any ideas for future profiles, let us know!

Jr. Ambassadors
, the quirky little ice-cream, sandwich and soup cart on N. Albina near Blandina St. is closed for now, but it's far from forgotten. Owner Rudy Speerschneider might not have had the most foot traffic at his bright orange hut, but he certainly continues to have a big impact on the cart scene. If you read Food Carts Portland on a regular basis you probably see Rudy - his Cheshire Cat grin graces the top left of our website banner. You can also read Food Carts Portland's original profile of JR Ambassadors from 2008, HERE

Rudy was one of the first Portland "cartrepeneurs" to branch out to North Portland, back in 2007. This was when his stretch of North Mississippi/Albina was less coffee houses and clothing boutiques, and more odd semi-industrial businesses and corner mini-marts. Rudy had a deal for his space, too - in exchange for free rent from his landlord next door Rudy kept the lot clean and chased off vandals and other riff-raff. "Yeah, the neighborhood was still a bit sketchy when I first moved in," Rudy recently reminisced, "but it made sense for what I wanted to do which was create a whole world around that cart and serve surreal and innovative food." This world is a place Rudy and a group of collaborators called Mostlandia.

Mostlandia was a concept in the grande DADA, Surrealist, Fluxis and other art traditions. It is best described on the Mostlandia website M.O.S.T
as being,

...a fantastic psycho-geographic location that exists between the locations of the four members of the M.O.S.T. The M.O.S.T. are physical portals to the realm of Mostlandia, but other intermittent and temporal portals to Mostlandia are known to exist. Unintentional entry to Mostlandia is often noticed by feelings of being completely unfamiliar with a very familiar street; a sudden fondness for the natural lighting of a particular location at a particular time; or a pleasant situation that occurs during the course of a normally routine task. Oftentimes, the existing portal expels the traveller almost immediately after they have entered Mostlandia, causing the traveller to have feelings of slight disorientation and general questions regarding the accepted concepts of "time" or "space". Contrary to many statements by the media, Mostlandia is not a "utopia", nor is it a "state of constant contentment". Temporary Tourists and Received Citizens of Mostlandia do more frequently experience senses of wonderment, however.

Jr Ambassadors was the most physical manifestation of Mostlandia and one of the "Portals" into this strange land. Indeed as I can attest firsthand, JR. Ambassadors' surreal menu and psychedelic vibe did indeed transport one to another world. I wrote about Rudy's smoked salmon and cream cheese ice-cream sundae in 2008 by saying,

Yes, you read that right - Smoked Salmon and Cream Cheese Ice Cream (WTF?). Then I tried it. Whoa. Riddle my taste buds. It was...delicious. It took my brain a couple of minutes to compute the cold, the creamy, the savory, the smoky fish and sweet of the cream cheese together with the added elements of dill and capers. But be damned, it somehow all worked in harmony. Served with flat bread type crackers and a sprinkle of dill and caper relish it was the bagel and cream cheese as reinvented by leading molecular chef Ferran Adria. Seriously, it was wonderful.

Sure, this type of dish might not be unusual in an edgy high-end restaurant, but for a simple food cart in a North Portland it certainly was unusual. Additional menu items weren't so outrageous, but they were still playful and often seasonal. For example Rudy's fall menu once included apple cider ice cream and a side of homemade donut holes, "it reminds me of the traditional cider and donuts people from my home state of Michigan have out at country farm stands during apple harvest time," Rudy said. Other flavors such as corn on the cob, gingersnap basil, and vegan coconut curry kept the whimsical ice cream theme going alongside more traditional strawberry, maple and others.

For the first year or so, Rudy also made soups and Panwiches - a type of griddled sandwiches made from corn and whole wheat pancake-bread stuffed with things like a tuna melt, or a Turkey Rueben. However, by 2009 soups and sandwiches mostly disappeared from the menu, transforming Jr Ambassadors into a full fledged ice cream cart.

I think an image of Alice falling down the rabbit hole in Alice in Wonderland sums up my experiences at this cart quite nicely. "I'm an artist first and foremost and I have always looked at Jr. Ambassadors and the food I create as an art project, not just a cart selling food." Indeed, this is precisely why Rudy has been so influential on the cart scene. "I wanted the community experience that a cart can bring, you know, the traditional nature of it with parents bringing there kids for the summer ritual of chocolate ice cream after dinner, but I also wanted people to experience the urban environment in a whole new way. I also wanted them to be transported through their taste buds." Rudy helped shape the Portland cart scene into something unique and creative here, more than just cheap filling $5.00 combo lunches, or giant burritos. In his own way, Rudy helped shape the foundation of a whole "cart culture" in Portland paving the way for everyone from Whiffies, to the Sugar Cube, to the newish N. Mississippi cart pod just down the street from his cart.

So what's on the horizon for Rudy? He's currently taking a sabbatical in Michigan and working on conceptualizing his next move. In a recent phone interview Rudy was adamant, "Jr. Ambassadors isn't gone, Mostlandia isn't gone, both are just living on the internet right now. I'll be back in Portland soon and you can look forward to something new when I return." Rudy wouldn't say what this new thing is, but he did hint at a possible expansion of his ice-cream to other carts, or a whole new cart completely.

We here at Food Carts Portland salute you Rudy Speerschneider for your leading cart vision, and look forward to your next project, whatever form it might take.